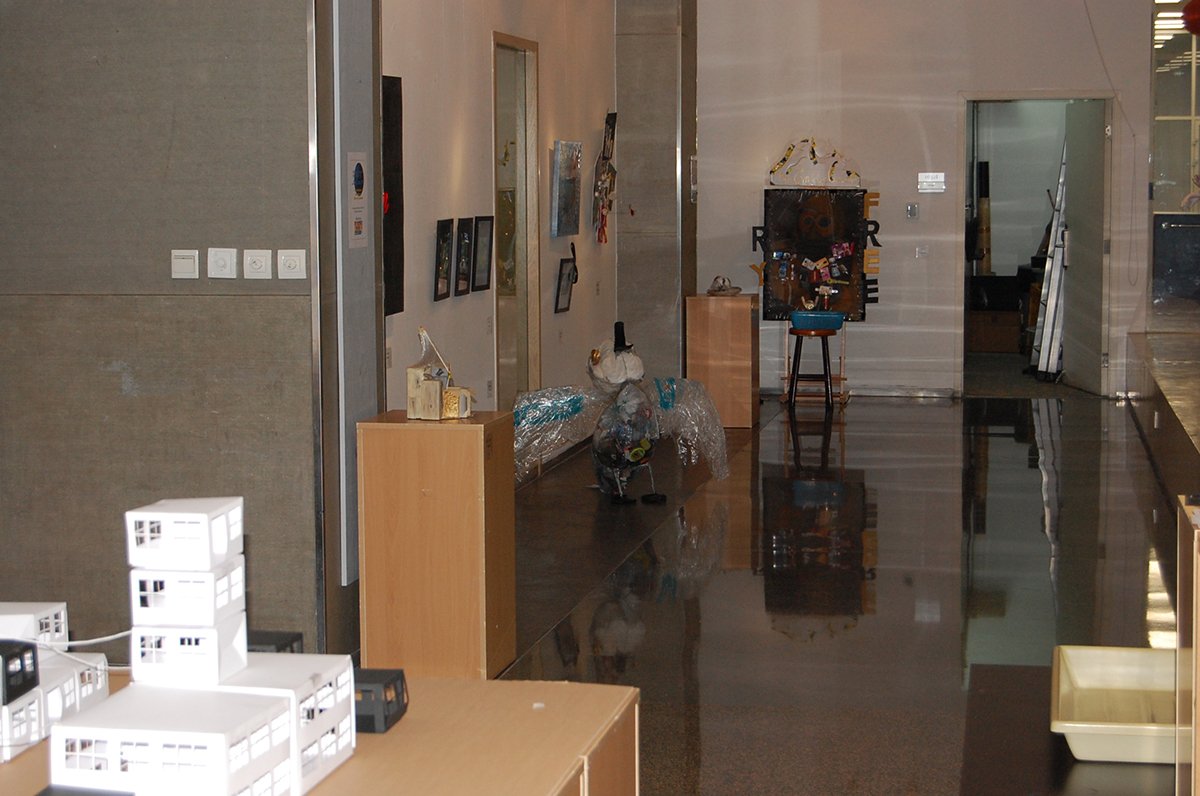 A critique of an art project, part 3

There was some truly brilliant work in the Art Can’t Save the World…or can it? (ACCTW) exhibition. One student used a laser cutter on their site to create templates of houses and invited viewers to participate in building a city. Another used augmented reality to change her paintings into a fulmination on ocean pollution. One young woman used whiteboard material and magnetized statements that stereotype women to address inequality. They had the freedom to use any media, and my role became the keeper of the supply closet key. Without a doubt, their solutions went far beyond what they would have accomplished with more direction from me.

We arranged to make an announcement at a high school assembly about the opening for the exhibition. Unfortunately, as with many things in a busy school, it got lost in a sea of announcements, and we did not get the turnout for which we had hoped. Debriefing the project with the students a few weeks later, they raised some interesting points about their experience.

One of the models that IC promotes can be summarized as Care-Aware-Able-Act (thanks, Mr. Moniz). You can learn more about this empowering approach here https://inspirecitizens.org/impact-campaigns/. While I think that the ACCTW project covered those four aspects, there are ways to make the project more impactful for students. Here’s my short list.

Time – While I had provided enough time to do some initial research, make the studio work (about six weeks) and put together a reflective portfolio, the students would have benefitted from more time to do primary source research, expert interviews, or site visits. We should have dedicated more time and energy into promoting the exhibition. Could this project be a semester or year-long one?

Connections – Building an on-going relationship with a community outside of school who could collaborate with the students and guide them to an understanding of the real-world impact of the various issues addressed in the SDGs. For example, there is a brilliant film called Landfill Harmonic which tells the story of an asentamiento bajo in Paraguay where the community makes musical instruments from the refuse in the landfill that is the community’s main source of income. What if ISB students (who can afford expensive instruments) connected with those students? Not only so the ISB students could exchange ideas about music with them, but so that the kids from the village could teach the ISB kids about resilience and passion? I’d like to find a connection like that for my classes.

Action – The students used their creativity and intelligence to make some intriguing artworks. I feel that they appropriately used the power of art. However, a community venue outside of school for the installation of the art and the opportunity for community collaboration would have been more satisfying – not making art about a group affected by a particular social issue, making art with them.

Integration – This project is begging to be interdisciplinary, but not as a one-off project where each disciplines’ proficiencies are co-opted to make a multi-layered investigation of a narrow issue. Over-arching questions of what it means to be a global citizen need to be mined from the specific attributes that each subject area can add and integrated into the school ethos. Those attributes likely need to be enlarged and viewed in new ways. The core class/elective model collapses and maybe even distinct disciplines themselves (but that’s another critique!). If the goal is building behavior that leads to empowered and competent global citizens the mindset is consistent, the habits adaptable, and the academic content interchangeable.

My students have told me that the SDGs are being integrated into their English and social studies classes. The idea is germinating at my school from the ground up. That’s where its power lies, and I think that’s where it should stay because school-wide initiatives scare me for the way they often become cumbersome despite their good intentions.  But, like a 17th-century Dutch painting where the still-life is the subject matter and the theme is the changing nature of life, the SDGs are the are the vehicle for the big idea of changing what our students become: people of purpose.

The question now is, do we go all in?

PrevPrevious“Art Can’t Change the World…or can it?” Part 2
NextWhat is Education for SustainabilityNext

Don’t worry, I hate spam as much as you do.